Leah and Shane aka “Sheah”.

Leah works in Ozanam House as a Childcare Worker in the Childcare center. Her dancing career came to an end when she was six after a freak hand gliding accident and has been since known to clear a dance floor in seconds!

Shane is a volunteer at Ozanam House and helps to teach the young children guitar as well as working with the teenage youth groups. His hobbies are’ hunting with his eagles and volcano testing’, hmmm?! He has danced while dressed as a clown so has lots to live up to! 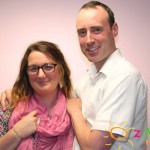