The Ancient Greek philosopher Socrates once said, “The unexamined life is not worth living.”

With this in mind, philosophy takes a look at life’s big questions. Over 10 weeks, we will discuss the questions that occupied the minds of the greatest thinkers the world has ever known.

Moving on from this, we will examine the philosophy of religion. We will focus on the works of St Augustine and Thomas Aquinas, and discuss Aquinas’ ‘proof’ of God’s existence. We will also examine St Anselm’s ‘Ontological Argument’ which states that God’s existence is a logical necessity.

We will move further through history to the 16th and 17th centuries where we will meet Descartes and discuss his theory of dualism where he famously quotes cogito ergo sum or ‘I think, therefore I am.’

We will look at the reaction to Descartes with philosophers such as John Locke, David Hume, George Berkeley and Immanuel Kant.

Finally, we will discuss what’s known as philosophical anthropology (what does it mean to be human) with thinkers like Friedrich Nietzsche, Albert Camus and Jean Paul Sartre. 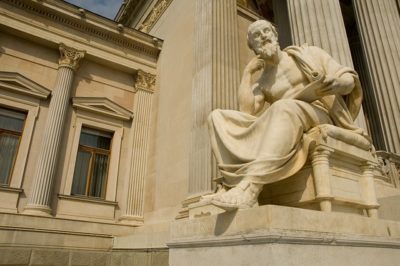